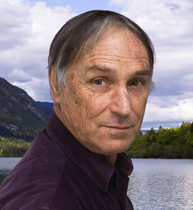 MARKO POGAČNIK was born in 1944 in Kranj, and lives in Šempas, Slovenia. He worked in Conceptual Art and Land Art as a member of the OHO group during the years 1965-71. He has had exhibitions in Aktionsraum, Munich, the Museum of Modern Art, New York, and Venice Biennale.

After 1979 he worked in the field of art combined with integral ecology (geomancy). He has developed a method of Earth healing called ‘lithopuncture’, which utilizes stones complemented with carved ‘cosmograms’. His works stand in many continents of the world, including Europe, South and North America, Africa and Asia. After 1998 he developed Gaia Touch body exercises to tune to the essence of the Earth and its transforming process.

His books in English include: Nature Spirits & Elemental Beings, Touching the Breath of Gaia, Turned Upside Down, Gaia’s Quantum Leap, Sacred Geography, The Universe of the Human Body, and most recently Christ Power and Earth Wisdom and Dancing with the Earth Changes. In 2016 he was appointed by the UNESCO Secretary General as Artist for Peace.'