Searching for the Fifth Gospel 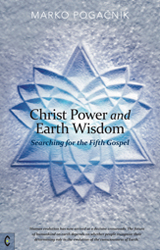 ‘Human evolution has now arrived at a decisive crossroads. The future of humankind on Earth depends on whether people recognize their determining role in the evolution of the consciousness of Earth.’ –  Marko Pogačnik

Humanity today faces a unique task: to overcome the thousand-year-old division between heaven and earth, spirit and matter. This, says Marko Pogačnik, is our present-day challenge. But we have an important ally in this work in the being of Jesus, also known as Christ, whose teachings are intended to help us at this critical time of human development. Historically, however, Jesus’ words of wisdom were harnessed to the construction of an earthly religion, and much of their deeper meaning was lost in the process.

Christ Power and Earth Wisdom is the story of the author’s discovery of a ‘Fifth Gospel’, woven invisibly into the four canonical Gospels. It teaches humanity how to live positively in the third millennium. Bringing together knowledge of elemental beings, Earth science and Christ, the author has translated over one hundred of Jesus’ sayings into a language that the modern mind can understand. He identifies blockages in the Biblical gospels that have prevented the Spirit of Christ from manifesting in the past era. But the time is now ripe for understanding the multilayered reality of these teachings.

Based on methods of investigation and perception that Pogačnik has developed over many decades of work in healing the various dimensions of Earth’s landscape and nature, he deciphers the hidden, holistic messages in Christ’s teachings, dismantling the obstacles that have arisen through outdated interpretations. The text is complemented with Pogacnik’s energetically-charged drawings, forming a feeling counterpart to the thought flow of the book. A new Postscript offers an important update relating to methods of gaining a broader, spiritual perception of reality in the present.

MARKO POGAČNIK was born in 1944 in Kranj, and lives in Šempas, Slovenia. He worked in Conceptual Art and Land Art as a member of the OHO group during the years 1965-71. He has had exhibitions in Aktionsraum, Munich, the Museum of Modern Art, New York, and Venice Biennale. After 1979 he worked in the field of art combined with integral ecology (geomancy). He has developed a method of Earth healing called ‘lithopuncture’, which utilizes stones complemented with carved ‘cosmograms’. His works stand in many countries around the world, including in Europe, South & North America, Africa and Asia. After 1998 he developed Gaia Touch body exercises to tune to the essence of the Earth and its transforming process.

His books in English include: Nature Spirits & Elemental Beings, Touching the Breath of Gaia, Turned Upside Down, Gaia’s Quantum Leap, Sacred Geography and The Universe of the Human Body. In 2016 he was appointed by the UNESCO Secretary General as Artist for Peace. Marko’s website is www.markopogacnik.com

Published in the UK by Clairview Books, 6 November 2019