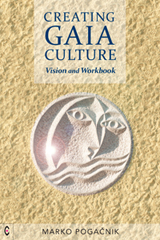 Humanity stands at the threshold of a new phase of Earth’s planetary evolution. Breathtaking possibilities – in tune with the evolutionary path of the universe – are now available. Yet the question arises: Does humanity have the ideas, foresight and potential for action that could create a culture that corresponds to the planet’s transformation?

In the midst of distressing ecological crises, Marko Pogačnik offers fresh hope. Having worked intensively in the fields of holistic ecology (geomancy) and Earth-healing for four decades, he now formulates a vision of a culture based on co-creation with Gaia (the Earth), her elemental worlds and beings from parallel evolutions. Creating Gaia Culture is also a workbook, featuring dozens of drawings and meditative exercises to help transcend mental obstacles by cultivating the quality of living imagination.

Pogačnik – UNO Goodwill Ambassador and UNESCO Artist for Peace – presents numerous ways to collaborate with the process of creating Gaia culture. He allows us to look into the primeval source of the future by interpreting the ancient book of the biblical Apocalypse – a text that holds the secret of Earth changes in a coded vision of a new human civilization – and uses his experiences, visions, dream stories and communications with beings from parallel worlds to trigger pictures that can enable a new human culture become a tactile reality.

‘The only path that makes sense is to reconnect with the essence of life and embrace a loving partnership with Gaia, Earth. This path involves a challenging transformation of our current cultures and may provoke changes in many aspects of the embodied world as we know it, as we continue to evolve into the future.’

MARKO POGAČNIK was born in 1944 in Kranj, and lives in Šempas, Slovenia. He worked in Conceptual Art and Land Art as a member of the OHO group during the years 1965-71. He has had exhibitions in Aktionsraum, Munich, the Museum of Modern Art, New York, and Venice Biennale. After 1979 he worked in the field of art combined with integral ecology (geomancy). He has developed a method of Earth healing called ‘lithopuncture’, which utilizes stones complemented with carved ‘cosmograms’. His works stand in many continents of the world, including Europe, South and North America, Africa and Asia. After 1998 he developed Gaia Touch body exercises to tune to the essence of the Earth and its transforming process.

His books in English include: Nature Spirits & Elemental Beings, Touching the Breath of Gaia, Turned Upside Down, Gaia’s Quantum Leap, Sacred Geography and The Universe of the Human Body, and most recently Christ Power and Earth Wisdom and Dancing with the Earth Changes. In 2016 he was appointed by the UNESCO Secretary General as Artist for Peace. Marko’s website is www.markopogacnik.com.

Published in the UK by Clairview Books, 14 October 2021