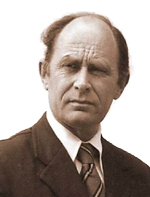 ANTONY C. SUTTON, born in London in 1925, was educated at the universities of London, Gottingen and California. He was a Research Fellow at the Hoover Institution for War, Revolution and Peace at Stanford, California, from 1968 to 1973 and later an Economics Professor at California State University, Los Angeles.

He is the author of 25 books, including the major three-volume study Western Technology and Soviet Economic Development.

add to basket     WALL STREET AND THE BOLSHEVIK REVOLUTION

add to basket     WALL STREET AND THE RISE OF HITLER