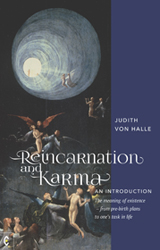 What is the meaning of life? As human beings, we cannot avoid this most basic question of earthly existence. Is consciousness simply an accident of the universe, as modern science would claim? On the other hand, many established religions suggest that life is a one-time experience, culminating in ‘eternal life’ in heaven or some kind of purgatory or hell. But how could this be equitable, given people’s vastly differing life circumstances?

As a response to such questions, the author discusses the concept of reincarnation – the development of individual souls over multiple lifetimes. She examines the idea of fate in relation to one’s occupation. What is more important: a well-paid career or finding one’s true vocation? Are our ‘innate’ talents and abilities the result of a gene-lottery at conception, or could they be related to pre-birth existence – to our own intentions for our forthcoming life on earth? The notion of reincarnation is a prerequisite for understanding one’s personal destiny or karma – a personal life plan created before our incarnation on earth. Through such ideas, the consciousness of one’s immortal soul-core – our inner being, that exists both before birth and after death – can be awoken.

The transcript of this enlightening talk is a stimulating introduction to contemporary perspectives on the ancient teaching of reincarnation and karma.

JUDITH VON HALLE, born in Berlin in 1972, attended school in Germany and the USA and subsequently studied archi­tecture. She first encountered anthro­posophy in 1997 and, in addition to her architectural practice, began working as a member of staff at Rudolf Steiner House in Berlin. In 2004 she received the stigmata, which transformed her life. Her first book, And If He Has Not Been Raised..., was published in German in 2005 and she now works principally as a lecturer and author. Several of her books are published in English, most recently The Coro­navirus Pandemic (Temple Lodge 2020) and Swan Wings (Clairview 2021). She lives with her husband in Berlin.