Our Mysterious Connections to Water 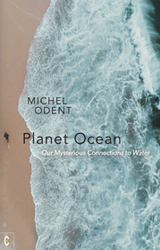 After introducing the concept of the birthing pool in the 1970s, Michel Odent has continuously expanded his interest in the mysterious connections between humans and water. In Planet Ocean he shows that the evolution of the oceans – particularly the fluctuations of sea levels – and the evolution of humans are inseparable. The oceans are the givers and sustainers of life, holding ninety-five per cent of the planet’s habitable space within their immense depths.

Odent steers us towards a radically new vision of human nature. Our defining feature – a supersized brain – becomes a leitmotif that enables links between topics as diverse as our nutritional needs, our relationship with sea mammals, and the way members of our species give birth. He relates ‘transcendent emotional states’ with what the French writer Romain Rolland referred to as ‘the oceanic feeling’ – both suggesting the absence of limits. Access to such states can be associated with, for example, a ‘foetus ejection reflex’. This leads to the extraordinary conclusion that swimming – as learnt behaviour among humans – the birth process and access to transcendence are interrelated topics for students of human nature.

Planet Ocean is a fascinating interdisciplinary study that demonstrates our manifold connections to water and suggests their relevance to everyday life.

MICHEL ODENT, MD, was in charge of the surgical and maternity units at the Pithiviers state hospital in France during the years 1962-1985. For many years he was the only doctor in charge of around 1,000 yearly births. He is the author of the first article in medical literature about the use of birthing pools (Lancet, 1983), the first article about the initiation of lactation during the hour following birth (1977), and the first article applying the ‘Gate Control Theory of Pain’ to obstetrics (1975). He coined the term ‘hormone of love’ when mentioning oxytocin. He created the Primal Health Research database www.primalhealthresearch.com, and has been a member of the Professional Advisory Board of La Leche League International for some 40 years. Michel Odent is Visiting Professor at the Odessa National Medical University and Doctor Honoris Causa of the University of Brasilia.