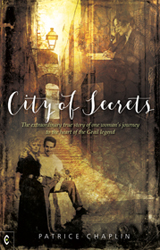 It is 1955 and a fifteen-year-old girl, seeking adventure, escapes the greyness of post-war London for the cobbles, sunshine and romance of an ancient Catalan city. When she falls in love with the place she also falls for its charismatic leader.

As the years pass and the girl becomes a woman, she returns again and again to Girona and to her lover, the enigmatic José Tarres. She meets captivating characters and hears about visions, a strangely wealthy priest, a fabulous garden owned by a Frenchwoman... Cast as the detective in her own story, she finds herself caught up in a world she barely knew existed.

The rich priest was none other than the Abbé Saunière of Rennes-le-Château, and the mysteries surrounding him are at the very heart of the modern Grail legend – the stuff of bestselling novels and movies, historical analysis and esoteric intrigue. The people she has known for so many years, including José, belong to a secret society that guards Saunière’s legacy. Now they ask her to be their messenger. It is time, they say, to present some of their closely guarded secrets to the world. The astonishing result is City of Secrets.

Patrice Chaplin’s modern classic is a page-turning, true-life adventure, rich with photographs, remarkable letters and antique documents. This new edition features an Afterword in which Patrice reviews the impact of the book’s publication on her life, on Girona and its mysteries.

Published in the UK by Clairview Books, 27 October 2020