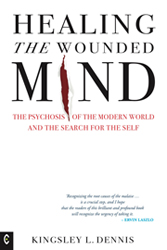 There is a mental malaise creeping through the collective human mindset. Mass psychosis is becoming normalized. It is time to break free...

One of the key problems facing human beings today is that we do not look after our minds. As a consequence, we are unaware of the malicious impacts that infiltrate and influence us on a daily basis. This lack of awareness leaves people open and vulnerable.

Many of us have actually become alienated from our own minds, argues Kingsley L. Dennis. This is how manipulations occur that result in phenomena such as crowd behaviour and susceptibility to political propaganda, consumerist advertising and social management. Mass psychosis is only possible because humanity has become alienated from its transcendental source. In this state, we are prisoners to the impulses that steer our unconscious. We may believe we have freedom, but we don’t.

Healing the Wounded Mind discusses these external influences in terms of a collective mental disease – the wetiko virus (Forbes), ahrimanic forces (Steiner), the alien mind (Castaneda), and the collective unconscious shadow (Jung). The human mind has been targeted by corrupt forces that seek to exploit our thinking on a grand scale. This is the ‘magician’s trick’ that has kept us captive within the social systems that both distract and subdue us. In the first part of this transformative book, the author outlines how the Wounded Mind manifests in cultural conditioning, from childhood onwards. In the second part, he examines how ‘hypermodern’ cultures are being formed by this mental psychosis and shaping our brave new world. In an inspiring conclusion, we are shown the gnostic path to freedom through connecting with the transcendental source of life.

Recognizing the root causes of the malaise ... is a crucial step, and I hope that the readers of this brilliant and profound book will recognize the urgency of taking it. – Ervin Laszlo

‘Kingsley Dennis, with eloquence and erudition, knows how to enter a field that most people find daunting, by way of a relentless search for new ways of thinking. Dennis, like few others, exhibits a timeless enthusiasm for discovery.’ – James Cowan, author of A Mapmaker’s Dream

‘Again, Kingsley Dennis demonstrates that he is one of very few thinkers who seem to understand the scope and subtlety of the immense transition that humanity is experiencing...’ – John L. Petersen, founder of the Arlington Institute

KINGSLEY L. DENNIS, PhD, is a sociologist, researcher, and writer. He previously worked in the Sociology Department at Lancaster University, UK. Kingsley is the author of numerous articles on social futures, technology and new media communications, global affairs, and conscious evolution. He is the author of several critically acclaimed books including The Sacred Revival, The Phoenix Generation, New Consciousness for a New World, Struggle for Your Mind, After the Car, and the celebrated Dawn of the Akashic Age (with Ervin Laszlo).

He has travelled extensively and lived in various countries. He currently lives in Andalusia, Spain. His homepage is www.kingsleydennis.com

Published in the UK by Clairview Books, 10 October 2019